To include Child Saving Institute's kids in your estate plans, please contact: 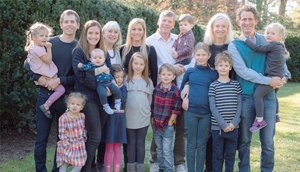 Children Are the ‘Be-All, End-All’

In the mid-1990s, former Omahan Cheryl Smith lived in the same neighborhood with her good friend Marge Durham.

Cheryl, who now lives in Houston, Texas, became involved with Child Saving Institute (CSI) because Marge introduced her to the organization.

“Marge asked me to serve on the Board of Directors,” Cheryl said. “When I sit on a board, I become part of an organization. I quickly got involved with the development team.”

She became so involved, in fact, that when the volunteer and events coordinator and director of planned giving and major gifts positions became available in CSI’s development department, she decided to resign her board position and apply. For about 20 years before joining CSI’s staff, Cheryl served as a volunteer on a number of guilds for other Omaha area organizations, helping to plan and execute annual fundraisers for Fontenelle Forest, the Omaha Children’s Museum, Planned Parenthood, Clarkson Hospital, and Ak-Sar-Ben, among others.

Recognizing the value of Cheryl’s expertise and connections, retired Chief Development Officer Wanda Gottschalk offered Cheryl the choice of either position.
“I decided I was ready to do something different,” she said, and served CSI as director of planned giving and major gifts from 1999-2005. She felt that it was a natural position for her.

“My dad instilled in me from the get-go that you can never do enough for children,” Cheryl said. “Children were his be-all end-all. We knew, as his children, that we were the most important thing in his life, as well as helping all children! If you are fortunate enough to have assets at the end of your life, you have an obligation to help. That’s the way I was raised.”

And she has followed through on her father’s legacy by becoming one of the first members of CSI’s Legacy Giving Society while also providing for her three children and 10 grandchildren.

“It’s vital to have Child Saving Institute around for children to help them get through all that life throws at them,” she said.

Ultimately, a gift from one’s estate is the final gift one can give, Cheryl said, and she wanted her gift to help kids.

“We have to take care of our children.”

To include Child Saving Institute's kids in your estate plans, please contact: