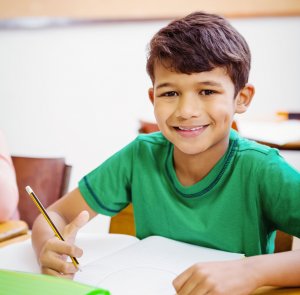 Oliver came to therapy at Child Saving Institute when he was 9 years old after he started having problems at school. Oliver had a difficult time paying attention in class and, when he felt anxious, he would pick his skin until it bled. It turned out that a family friend had sexually abused him two years earlier, but attempts to engage Oliver in therapy at that time were unsuccessful.

This time his parents made and appointment with CSI.

Therapist Vanessa Summers first met with the family about nine months ago. In many ways, Oliver presented as a typical second-grader. He was interested in reading, riding his bike, drawing, and watching his favorite YouTube channel. During the first several sessions, Vanessa worked with Oliver and his family to educate them in ways a child may express the stress and emotions associated with trauma, including unhealthy behaviors such as picking his skin, lack of focus, and other symptoms.

Initially, Oliver was very reluctant to participate but Vanessa took her time and developed a positive relationship by playing games and allowing him to guide the conversation. As Oliver began to trust Vanessa, she was able to talk with him about his emotions and the resulting behaviors.

“We spent several sessions helping Oliver recognize his emotions,” Vanessa said. “We talked a lot about the physical ways an emotion might feel so he could begin to name the way he felt. Then we talked about how someone might act when feeling that way. ”

Oliver actively participated in his sessions with Vanessa. They practiced identifying emotions through reading, drawing pictures and playing “feeling charades.” Once Oliver could identify his emotions, Vanessa began to teach him healthy ways to cope with his feelings including breathing and redirecting his thoughts.

Vanessa and Oliver also read books about experiencing trauma, including “Something Terrible Happened.” They talked about the ways the main character acted out because he was anxious and afraid. They talked about the character’s trouble at school and at home because he did not understand his anxiety and fear. In the story, a therapist helps the main character manage his emotions and heal from his trauma.

But every time Vanessa would ask Oliver about his trauma, he would shut down, sometimes hiding behind a chair and avoiding eye contact.

“He would say ‘no,’ or get upset, or ask for his parents to come in,” Vanessa said. She reassured him that he did not have to talk about it right then, but that he would feel better when he finally did. “You’re in charge of your story,” she told him.

Vanessa suggested that perhaps Oliver could share his story by setting up a sand tray — a therapy mode which allows a child to show their story using small representative toys — starting with his life before the trauma and, in later sessions, his trauma story, the aftermath, and his future. He set up the life before tray in the next session, but refused to do the other trays.

About six months into their sessions, Oliver began to ask Vanessa when their sessions would end. Vanessa told him that it was up to him, that he was in charge of his story and therapy would end after he felt safe sharing his story. She followed up by saying that he may choose never to tell his story, and that would be OK too, as long has he knew he was safe. She told him she was there for him and that therapy is a safe place to share.

A couple months later in the middle of a session, Oliver began writing what he wanted to tell Vanessa. He wrote that he was scared to share his story and worried about telling her because it was “icky.” Vanessa assured him that was understandable and together they wrote down some of the coping skills they had practiced to help him feel safe and calm. Oliver asked Vanessa to close her eyes while he wrote. She complied. By the end of that session, Oliver had shared what he called “The Beginning” of his story. He told Vanessa he would never share “The Middle” or “The End” of his story.

At the next session, he again asked when therapy would end. She answered as before, and he asked, “What if I don’t want it to be done?”

Vanessa told him that they would know when the time was right.

“I told Oliver that now when he has big feelings, he knows he can handle them,” Vanessa said.

The therapy sessions sometimes included Oliver’s parents. Vanessa coached them how to recognize and address Oliver’s behaviors when they are symptoms of stress, anxiety, fear, or anger. She facilitated communication between Oliver and his parents around the trauma, though Oliver would not speak about it directly.

For example, before starting therapy, Oliver kept secret the reasons he had “bad” days at school. If his parents asked what happened, he would shut down or just leave the room. Vanessa helped them understand the need to be patient with him and the importance of making him feel safe, letting him know they will always listen and help when they can.

During Vanessa’s most recent session with Oliver, he wrote her a note and told her to read it after he left.

When she opened it, she smiled. It said: