Home  ➥  Events and News  ➥  For the Love of Children

For the Love of Children

People have different reasons for bonding with Child Saving Institute. Some have an adoptive relationship; others become involved due to a church connection. Rev. Ken Moore happens to have both those affiliations. From the comfort of his south Lincoln home, he recently shared the story of why he decided to leave a legacy gift to CSI.

"The reason I got involved in child issues is right on that shelf," he said, pointing to a photograph of a pretty young woman holding a baby. The woman is his daughter, Kristine, whom he and his first wife fostered and later adopted, starting when she was three years old. He explained that Kris had been in five different foster homes in her short life, and had suffered abuse at the hands of some of her caretakers. Now a married mother of two living near San Francisco, she continues to be the inspiration for his work on behalf of abused and neglected children. 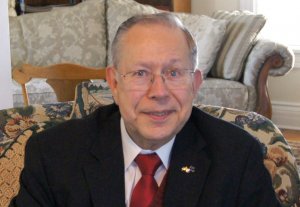 Long before Kris joined his family, Ken served as a pastor in Montana for 15 years. During his stewardship there, he was president of funds distribution for United Way and became involved with an organization called Healthy Mothers/Healthy Babies. In addition, he went on to help write the state's "Kids Count" report. (Still today an award bearing his name is given to honor individuals who volunteer on behalf of children’s issues in Montana.)

When Ken later took the position of Regional Minister of the Christian Church of Nebraska, he was already familiar with Child Saving Institute's work. "In fact, it was one of the things that influenced my decision to come to Nebraska," he notes. "I had long heard people talk about their congregations' relationship with CSI, and it was clearly something I was passionate about."

Within a month, he had attended his first meeting as a member of CSI's Board of Directors. "I was very impressed with the skilled staff, the organization of the board, the comprehensive services the agency provided… I’ve always felt a tremendous sense of pride about what we are doing at Child Saving Institute." Ken also had a hand in establishing the organization's mission: "Responding to the cry of a child."

Ken said when he considered which organizations he might recognize in his estate plan, he measured the "staying power" of the agency. "I wanted an organization that would still be running long after I'm gone. It also has to be trustworthy. I wanted to give to an organization that is really well run and one in which I feel confident my gift will go to the area of greatest need. With that as my criteria, Child Saving Institute was a natural choice."