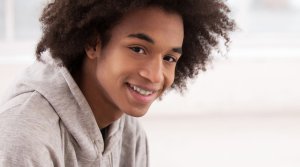 Cameron arrived at Child Saving Institute's Emergency Shelter in fall 2018 with a negative mindset. He made it clear that he wanted to go home. He ran away with another Emergency Shelter resident four days after arriving. Two days later, Cameron turned himself in because he became extremely ill (he suffers from a recurring illness).

Upon returning, Cameron' behavior changed drastically. He became a role model for his peers, earned gold status daily, and exceeded expectations. He came to respect the staff and his peers. Cameron thrived when he could prove wrong anyone who doubted him.

Cameron often encouraged his peers to have a positive attitude and be respectful to others. He led by example and was the first to engage in groups and follow the daily routine.

Staff also learned that positive reinforcement bolstered Cameron’s confidence. He took his therapy sessions seriously. He began to learn about his disease so he could avoid frequent medical crises.

When Cameron arrived, he was behind in school and was not currently passing classes. In just over a month, Cameron made up missing credit and got back on target for the semester. Since leaving the Emergency Shelter, the school reported that Cameron is on target to graduate and earned straight A’s in all his classes, becoming one of the school’s best students.

Staff found out that Cameron enjoys being active and previously played club basketball. Cameron told staff that he has goals he wants to achieve and that he wants to prove to himself that he can complete school, go to college, and possibly play college basketball.

Cameron shared with staff that he did not want to go to a group home when he left the shelter. He hoped to move into a foster home so he could remain in his school and on target to graduate. He also expressed the importance of remaining close with his family. He told staff that he felt he could be successful in a foster home, but would not give up hope of returning home at some point. He expressed concern that the foster family would want to "replace" his family.

Cameron's hope was fulfilled and he moved to a foster home upon discharge after seven weeks in the Emergency Shelter. He hopes this will give him a second chance to prove that he can accomplish his goals and make positive decisions.